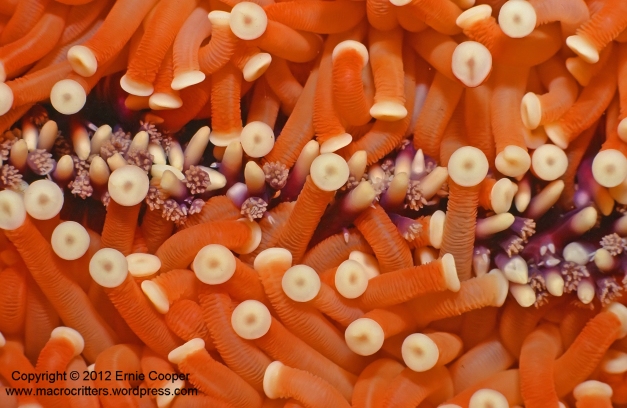 The photo above is a close-up look at the tube feet of a sunflower starfish (Pycnopodia helianthoides) as it crawled on the inside of a glass aquarium. Sunflower starfish have 16 to 24 arms and, at up to a metre across, are the largest species of starfish in the world. They are also probably the fastest—according to the NOAA website they can travel at up to a metre a minute, which is surprisingly quick for a starfish. These starfish are so big, so fast and so common that they are one of the most important marine predators in the Pacific Northwest.

I took the picture over 20 years ago and recently had the original Fujichrome 50 slide scanned and digitized. I’ve posted scanned photos several times before, and as always, this one needed some editing (see for example: Photo editing: a scanned picture of an opalescent sea slug before and after).

The unedited scanned version is shown below. 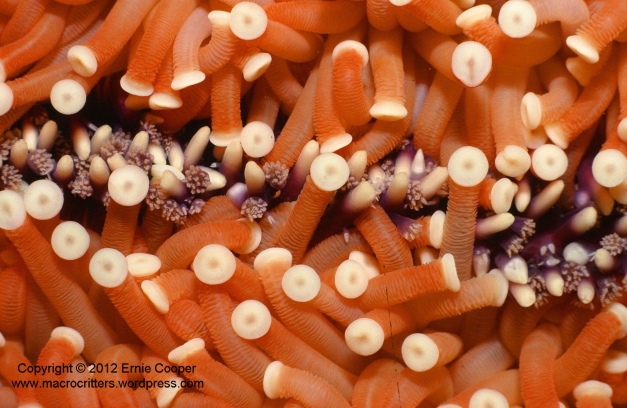 The first thing I did to improve the image was to open it with Photoshop Elements 8.0 and adjust the contrast. I also increased the colour saturation (by + 10). These tweaks greatly improved the impact of the picture and the result is more like the original slide. However, the original slide had a significant problem: the line of crud on the inside of the glass, in the lower part of the image. I remember how disappointed I was when I got the slide back from the developer and saw that flaw. Now of course with Photoshop I was able to make it go away with a few clicks of the Clone Tool!

The last step of the editing process was to remove the excess noise in the image that had appeared as a result of the scanning process. I opened the image with Noiseware and cleaned it up with the software set on the default setting.

The final result (at the top of the page) is a colourful, cool photo that—because I was able to remove the debris on the glass—is arguably better than the original.