Hillstream loach from the underside 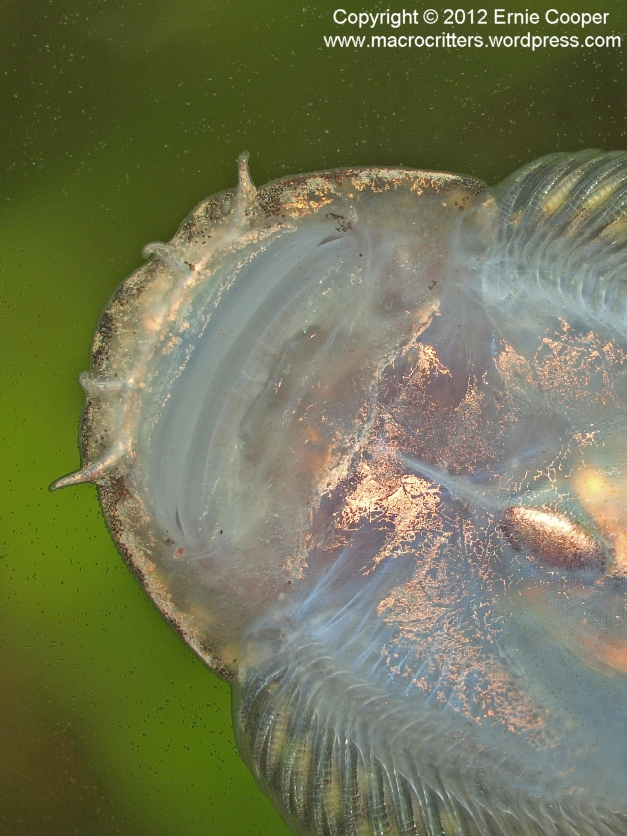 Lately I have been spending most of my free time—what little there is of it—trying to improve my photo stacking technique. I just don’t seem to be able to produce consistent, high quality images. Each stacked image requires considerable time and effort to produce. I need to set up the equipment and specimen; take approximately 100 images; and then process and edit the stack. To go through all that and then repeatedly end-up with an unsatisfactory image has been more than a little frustrating…

So taking the photos for today’s blog has been both a pleasure and a relief—this is the kind of photography that I am really comfortable with!

The picture above is of a type of fish called a hillstream loach (family Balitoridae)—although you would be excused if you didn’t immediately recognize it as a fish. That’s because these are photos of the underside of the animal—taken as it moved across the surface of the glass in my aquarium. These fish are adapted to life in fast flowing water and are dorsoventrally flattened to reduce water resistance. They live by clinging to the surface of rocks and submerged objects, grazing on algae and other microorganisms. And that’s what it was doing when I took this photo…In fact if you look closely you will see tiny little dots scattered over the surface of the glass: these are green algae. Normally I would hate an aquarium photo that didn’t have utterly clean glass—it should look as if the picture was taken in the water and not through the glass. But in this case, the scattering of algae adds to the photo by providing context: it shows that the specimen is on glass while showcasing the food it is grazing on. 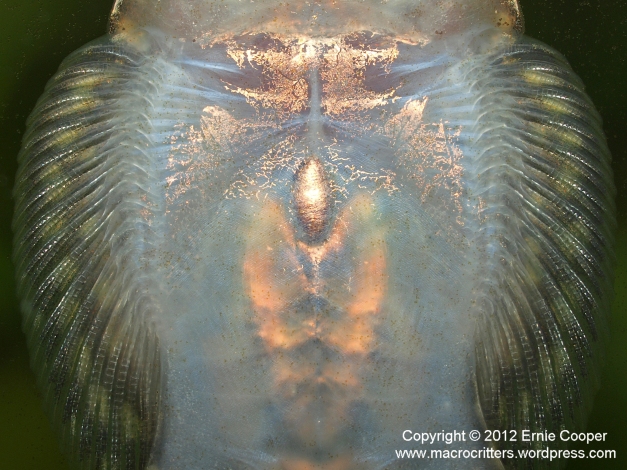 I purchased this specimen mainly because it is a really interesting little fish (it’s about two inches long), but I also really wanted to get a nice photo of the underside of its head (like the picture at the top of the page). I have a lot of wood, stones and plants in my aquarium, so when I put the loach into the tank it promptly disappeared. I didn’t see it again for a couple of weeks. Then yesterday it made an appearance on the front glass of the aquarium and I quickly snapped these pictures.

In case you don’t recognize what you are looking at in the photo above, I have added another (below) with a few of the fish’s body parts labelled. 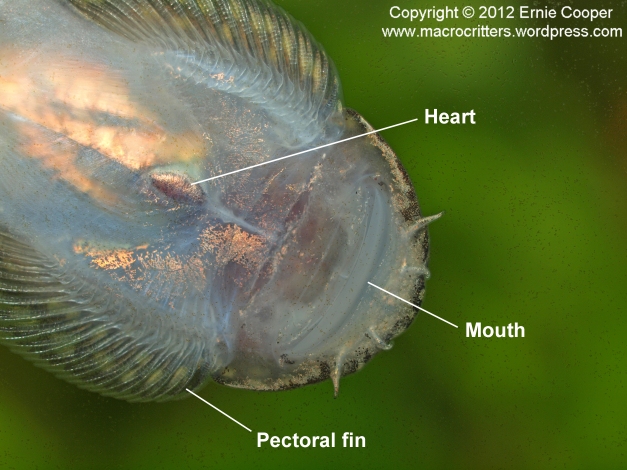 This is a very pretty fish and if I ever catch it out in the open I’d love to get some nice pictures of the animal itself. But so far it has always been stuck to the glass. Today I did manage to take a few quick photos of the fish as it as hanging out on the side glass of the aquarium. They aren’t great photos, but at least you get an idea of what it looks like. Hopefully I’ll add more photos in the near future… 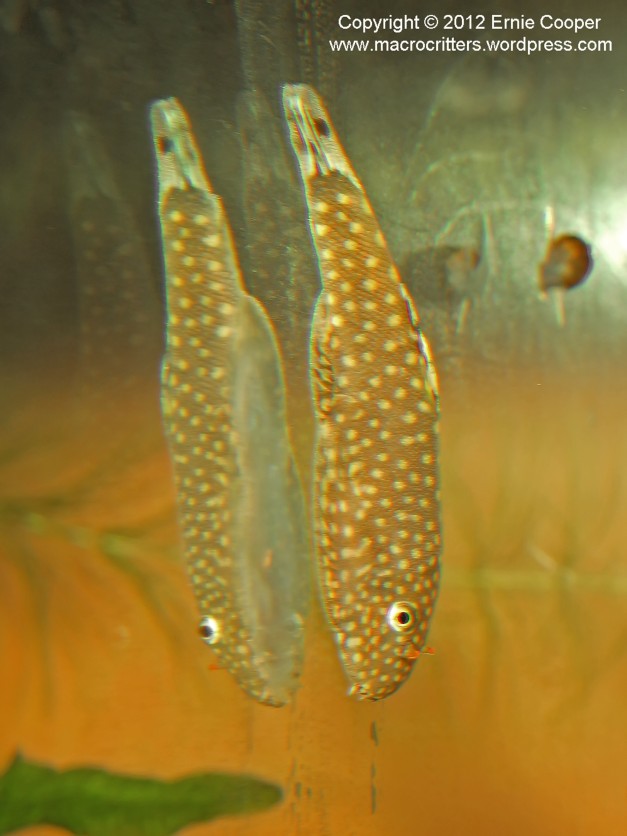 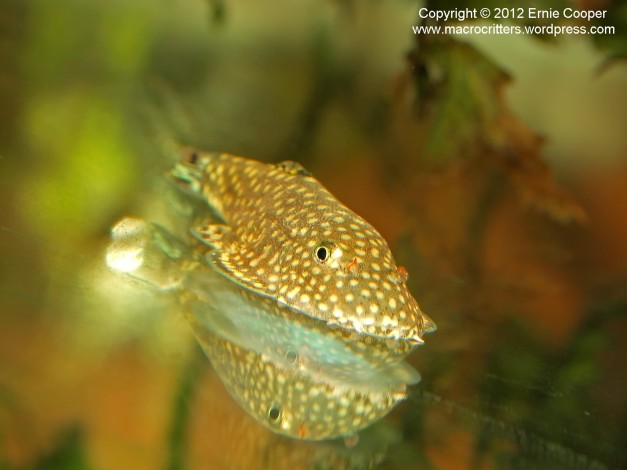 Front view of a hillstream loach

And now back to puzzling over photo stacking…

I’m not lion: this is a fishy story

“…and now for something completely different…” (Monty Python’s Flying Circus)

This portrait of a lionfish (Pterois volitans) is—somewhat surprisingly—the first photo of a fish that I have posted on this site. It’s also a marine species (I have only posted pictures of marine animals a couple of times so far) and, most significantly, this animal isn’t nearly as small as my typical subject. The sunflower starfish that I featured in my last post was a larger beast, but I only photographed a very small part of it. Plus, these days I try to avoid pure black backgrounds and typically try to create images that have either a natural or a pure white background (as a result of using a white box). Today’s picture is different from my usual content in many ways…hence my Monty Python quote.

This is another picture that I took over 20 years ago and recently had scanned and digitized (from a Fujichrome 50 slide). I chose to scan this slide both because of what was good about it, and what was bad. When I looked at the slide I really liked the composition, and the contrast between the fish with its contrasting stripes and the black background is quite striking. However, the colour of the fish was overly muted and the resolution was not optimal as a result of shooting the animal through very thick glass in a public aquarium. The glass also wasn’t clean, as evidenced by the murky reflection visible against the black background at the top of the photo. I was curious to see what I could do to improve the picture digitally. I am still a novice when it comes to Photoshop, but I am trying to improve—and I have come a long way in the past few months. It seems to me that the best way to develop my technique is to work on less than perfect images.

The unedited scanned version of the picture is shown below. It most definitely isn’t a prize winner…its washed-out and not overly crisp; plus there is a lot of noise in the photo as a result of the scanning process. There’s quite the difference between the picture below and the final version above, isn’t there? 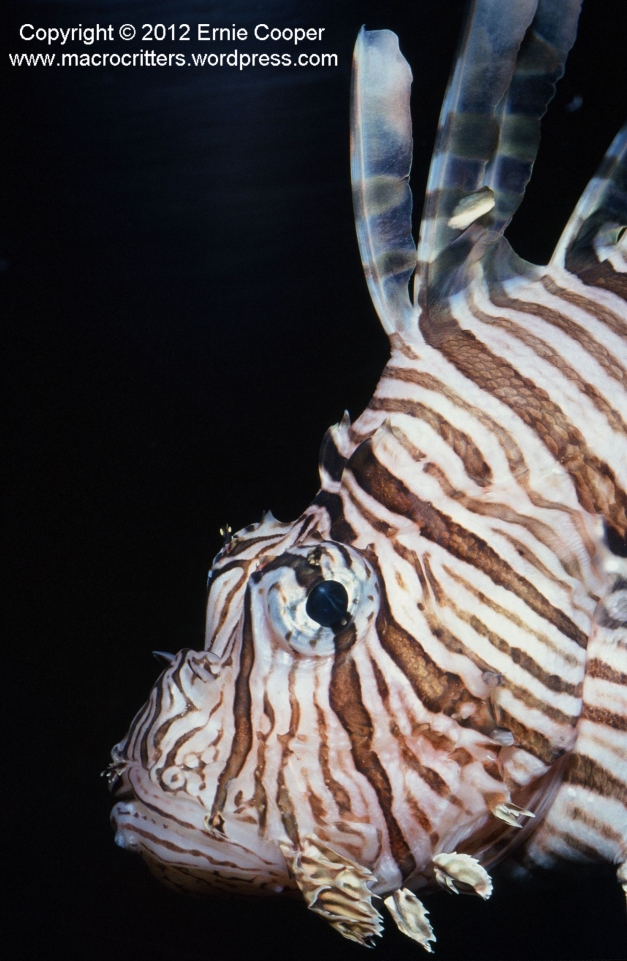 The following are the steps I took to edit the image:

The resulting image is shown below.

As you can see, it is a much better picture that the original. However, it still isn’t really crisp, nor is it quite as good as the version at the top of the page. 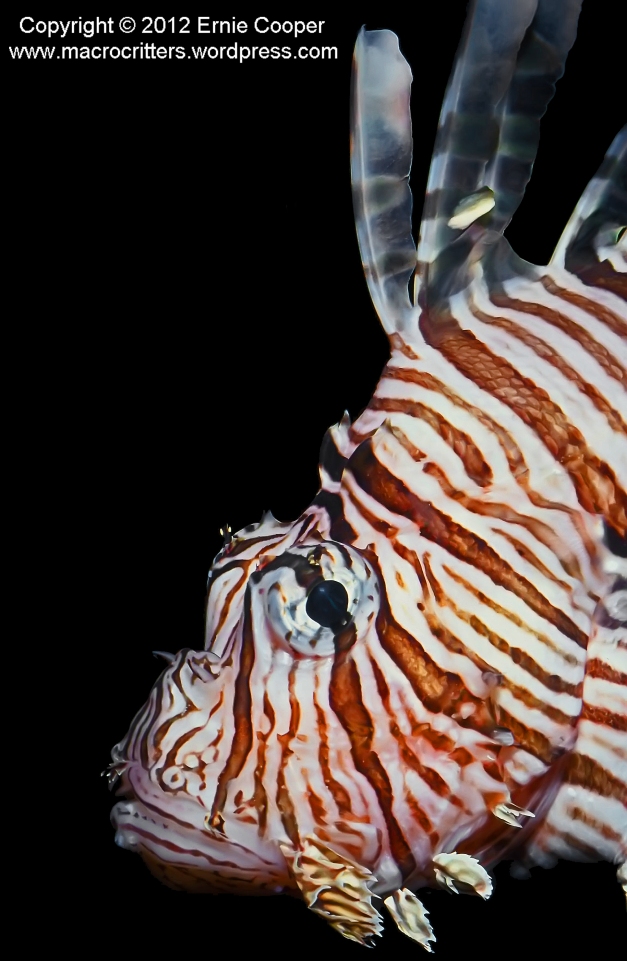 Portrait of a lionfish scanned from a 35mm slide after editing for contrast, colour and sharpness

My final editing step was the following nifty little trick:

Needless to say it would have been far preferable to start with a nicely exposed and composed photo that doesn’t need editing. But it is pretty cool that software like Photoshop allows one to dramatically improve less than perfect pictures.