Maple syrup in the garden of good and weevils

The thing about macro photography is that one always wants to get closer—to shoot at higher magnification and get a better look at some tiny creature. Or at least that is certainly true for me. My 35mm macro lens gets me to 1:1 magnification, but I often want to get closer. Instead of taking a photograph of a fly, I want to take a photo of a fly’s face…that sort of thing. I have to admit I am very envious of Canon users who have the option of using the MP-E 65mm macro lens which focuses to an amazing 5:1! But I shoot with Olympus equipment and I’m not about to switch and start building a whole new system at this point. So I have been looking at other options for shooting at magnification higher than 1:1 in the field (rather than in the studio).

This past winter I bought a Nikkor 50mm F2.8 enlarger lens off eBay for a whole $20.00. This lens has a reputation as a good sharp macro lens when reversed on a bellows. So using a couple of $2.00 adaptors (also off eBay) I tried mounting the lens (reversed) on a vintage OM telescopic auto extension tube 65-116 on my OM-D EM-5 body. The result was magnification of almost 2:1 with the auto extension tube collapsed, and almost 3:1 with it fully extended. Surprisingly, the working distance is very respectable at 6.5cm (collapsed) and 5.5cm (extended) compared to only 3.5 cm for the 35mm macro (at 1:1). 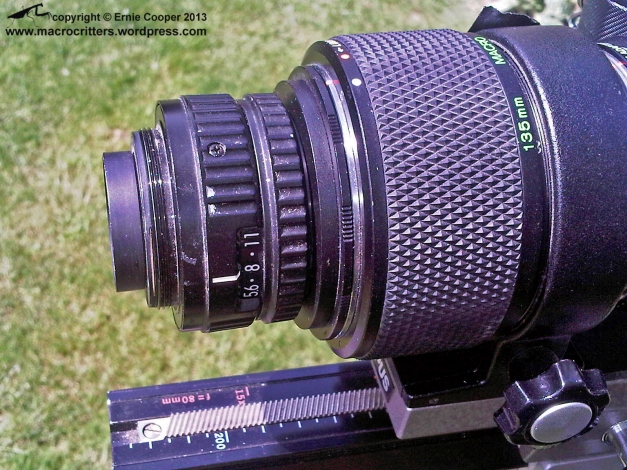 The drawback of course is that the lens is totally manual, so when you stop it down to increase the depth of field, the viewfinder gets darker. You also lose light due to the extension of lens away from the body: when the telescopic auto extension tube is fully extended there is a loss of about three stops of light. With the lens stopped down to F11 you are looking through the lens at the equivalent of F32. It is dark and a little difficult to see well enough to focus.

I tested this gear on the same day that I shot the photos for my last post (see Weevil meets flash diffuser) and with the same weevil. I again used my DIY foamcore flash diffuser.

Hand-holding the camera at this magnification is really tricky: it is very hard to keep the subject in focus and you are working with very little depth of field. In an effort to keep the weevil from moving around I offered it a drop of maple syrup. Being a good Canadian insect, it happily sipped while I photographed it. All it needed was some back bacon and a beer…

The photo at the top of the page is the best result I got with the Nikkor lens that day. All-in-all I’m reasonably satisfied. I expected some loss of resolution due to the extension, but it didn’t turn out too bad. Interestingly the images taken with this lens have higher contrast and more muted colours than those I shoot with the Zuiko 35mm macro. So this set-up definitively doesn’t produce images as nice as the Zuiko, but the price was certainly right; and I was able to photograph a tiny insect taking a drink from a drop of syrup…and that’s pretty cool!

Unidentified weevil, pausing to take a drink from a drop of water

In my last post (Of flies and flashes) I noted that I had some ideas for how to put together a diffuser for my new FL-36 flash that would be lightweight, simple to use and produce nice soft lighting for macro photos in the field.  I wanted something that would be quick to set-up with the flash mounted directly onto the camera hotshoe. I semi-seriously referred to it as my flash diffuser Mark II.

Well last weekend I sat down and built a diffuser using foamcore, white paper and white duct tape. It is modeled after the LumiQuest Softbox diffuser I discussed in my last post, but the front is angled down to light subjects close to the lens. The working distance for my 35mm macro lens is only 3.5 cm when is focussed to maximum (1:1) magnification, so I needed a diffuser that would effectively light a subject at that distance.

I used foamcore because it is strong, extremely light (it is just Styrofoam covered with paper) and very light reflective. I have included the design and dimensions of the diffuser in the graphics below in case anyone is interested in making a version for themselves. Keep in mind that I designed this diffuser specifically to fit on the FL-36 flash: the dimensions of which are 6.5cm x 4.2cm. This design may need to be modified to fit other flash models.

Diagram and dimensions of the top and bottom pieces of the flash diffuser: the two pieces were identical except that the bottom was cut short along the upper dotted line. Both pieces were cut along the lower dotten line but only on the inner surface and not all the way through

I cut-out the four sections of the diffuser (two sides, a top and a bottom) with a razor blade. The bottom piece was identical to the top except that it was cut shorter as shown in the diagram. Each piece was cut on the inside surface along the dotted line shown in the diagrams, being careful not to cut the whole way through the foamcore. That allowed the pieces to be folded out to form something of a square based pyramid shape. Then the edges of the pieces were taped together with white duct tape. All of the cut edges were also covered with duct tape. Lastly, a piece of white sketch paper was cut and taped over the wide end of the diffuser.

Structurally, the diffuser worked out very nicely. It is solid but extremely light, and fits snugly on the flash. Set-up is a snap: just slip the flash onto the camera hotshoe, push the diffuser onto the flash and voila! The photos below (taken with my phone) show the diffuser and flash mounted on the camera. 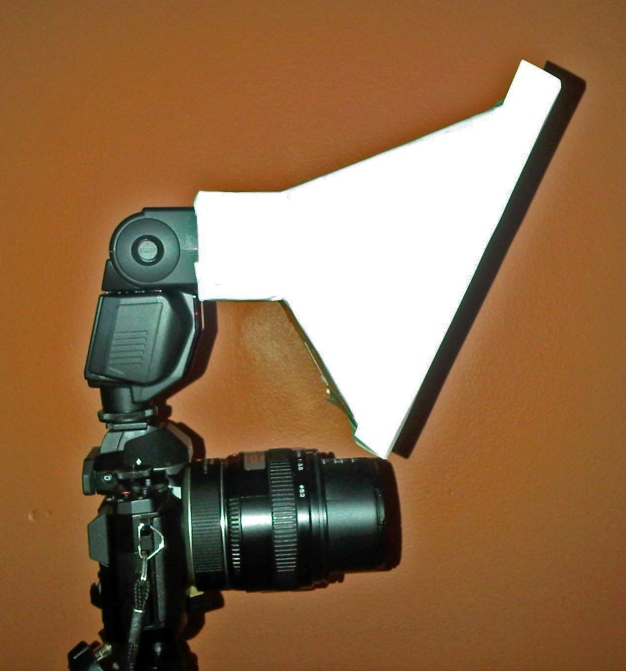 Olympus OM-D EM-5 camera and FL36 flash with diffuser made from foamcore, white duct tape and paper (side view)

But the real test was of course whether it produced the results I was looking for. The photo at the top of the page, of a rather nice little (unidentified) weevil, was the first picture I took with the diffuser. I couldn’t be happier. You can expect to see plenty more photographs taken with this diffuser in the coming weeks.

There are only two drawbacks to the design. Firstly, the top front edge of the diffuser sticks out well past the front element of the lens. This is actually a good thing in most cases (I think) because it means the background of a picture should be well illuminated too. The drawback is that I can’t use it for aquarium photography or in other situations where there is an obstruction above my photo subject. Secondly, this diffuser would be awkward to pack for travel. It would be nice if it could be folded away when not in use. Maybe that’s a design idea for a flash diffuser Mark III…