How many store clerks does it take to sell a praying mantis? 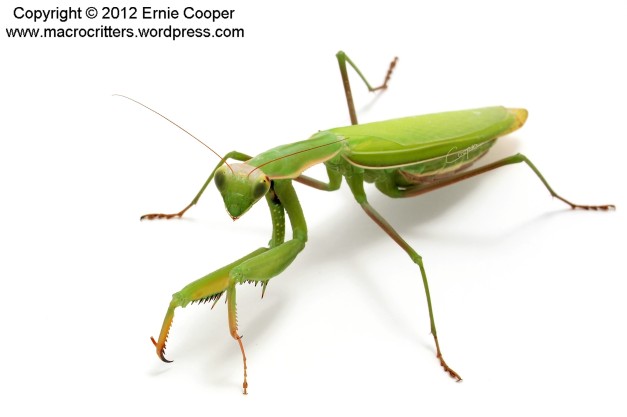 A friend of mine [hi Andrew!] mentioned to me yesterday that he had seen a praying mantis for sale at a local pet shop. I’ve been meaning to get some mantids to photograph for some time, but they are very rarely offered for sale around Vancouver. So I dropped by the pet shop today to take a look. Sure enough they had a nice big, green mantid for sale. Not surprisingly I didn’t recognize the species. So I went up to the clerk to get some information about the animal and its care.

Me: “Hi, can you please tell me what species of praying mantis this is, and where it is from?”

There was a short pause while I waited for her to continue. She didn’t.

Clerk 1: “A guy just delivers animals to us; we don’t know where they come from.”

Another pause while I tried to digest this.

The clerk turned to the phone, looked up a number in a notebook and made a call. After talking to someone for a couple of minutes, she turned back to me.

Clerk 1: “Did you want to know where they come from or where this one came from?”

Yet another pause while I figured out what she was actually asking.

Me: “I would just like to know what species of mantid it is and from what part of the world it is native to, so that I can understand what kind of care it needs and decide whether to buy it.”

She turned went back to the phone and talked for a few more minutes. Finally she hung up, and turned around again.

At this point I realized that any further attempt at getting information about the animal was futile, and I decided to just buy the poor critter and figure out its husbandry needs when I got home. My decision to buy the mantid provoked a debate between the clerk and another staff person (clerk 2) as to what to put the animal into. Eventually an appropriate container was found and the insect was transferred.

I then asked to also buy four large crickets (to feed to the mantid). Clerk 1 yelled to someone in the back of the store to catch the crickets and then proceeded to ring-up my order. I paid with my debit card, and my receipt went into a bag along with the container holding the mantid. At that point a little old lady (clerk 3) walked out from the back room and announced that they were out of crickets. Considering that I had already paid for the crickets, this meant that a refund was in order. This caused considerable consternation for the clerk as she had no idea how to refund a purchase made on a debit card.

At that point a fourth staff person (clerk 4) walked into the store. The first clerk frantically called him over and explained what had happened. After some discussion and a careful examination of the debit card machine (I’m not sure what they were looking for), clerk 4 explained that he knew how to refund a credit card purchase, but not debit.

Clerk 4: “Would you accept store credit?”

One last pause—I think I actually sighed out loud this time. I explained that I didn’t shop at that store very often and didn’t really need 72¢ worth of credit. I convinced them to give me the refund in spare change and was finally able to take my purchase and exit the store.

Given that I didn’t know how old the mantid was, or what kind of care it had been receiving, I decided to photograph it as soon as I got home. It would have been very frustrating if the poor thing died before I had a chance to take its picture! I used the white box apparatus and technique that I described in my previous post:How to: white box photography of Macleay’s spectre stick insects Extatosoma tiaratum.

After photographing the mantid I released it into a nice roomy vivarium, and fed it a nice fat cricket (which I stole from my son’s pet scorpion). Once I know what kind of mantid it is (I suspect it is a giant Asian mantis, Hierodula membranacea) I’ll see about taking some more photos in a more natural setting.

Oh, and the answer to my question is four. It apparently takes four clerks to sell a praying mantis.