To quote Monty Python’s Flying Circus: “and now for something completely different…”

A couple of weeks ago I posted a photo of a mosquito that had just emerged from its pupae and was standing on the water surface getting ready to fly off and find something to suck on (see Flyday July 12, 2013: a fresh new mosquito). I took these pictures on the same day and in the same place. Unlike the previous mosquito, however, this one had arrived at the end of its short life, not the start.

I don’t know whether this specimen was another new mosquito that drowned after emerging, or if it was a mature mosquito that had returned to the pond to lay eggs. In either case I was intrigued by this little corpse floating on the water surface, slowly growing a garden of algae.

A dead mosquito floating on the surface of a pond. Photographed with an Olympus OM-D E-M5 and Zuiko 35mm macro lens. Magnification=1x. This is more typical of my style of photography…less artsy and more “just the fact’s ma’am!”

I can usually explain very easily why I like (or don’t like) a photo, usually based on technical points. But I really can’t explain why I really like the picture at the top of the page, but I do. It certainly isn’t much like the photos I typically post. And that is probably part of the appeal. Somehow the shallow depth of field, muted colours and twisted perspective give the picture an interesting atmosphere…almost poignant.

A poignant photo of a dead mosquito! Like I said…something completely different…

For a description of how I adapted the El Nikkor lens to the Olympus telescopic enlarger lens and OM-D E-M5 body, see: Maple syrup in the garden of good and weevils.

Mosquito photographed (in Delta, BC, Canada) just after it had emerged from its aquatic pupa and was standing on the water surface readying itself to fly away

Many people don’t realize that mosquitoes are a type of fly.  I photographed this nice specimen just after it had emerged from its aquatic pupa and was standing on the water surface readying itself to fly away. It’s amazing how pretty this little beast was when you see it up close, what with its sparkly green eyes! It would probably be even prettier if it had a gut full of red blood too! Hmmm…green eyes and red blood…that gives me an idea of what to post next Christmas!

Portrait of a mosquito photographed (in Delta, BC, Canada) just after it had emerged from its aquatic pupa and was standing on the water surface readying itself to fly away

This mosquito was a product of my backyard swamp: an old half wine barrel full of mud topped with a few inches of water (and planted with a thick mass of emergent water plants). This was also the source of a number of nice mosquito larvae and pupae that I also photographed. Those photos will be the subject of another post in the near future.

And no, biting mosquitoes aren’t a problem in my garden. The many spiders, damsel flies and other insect predators (not to mention my carnivorous plants) seem to be more than a match for the relatively small number of mosquitoes that emerge from my “swamp”. In fact I haven’t had a single mosquito bite so far this summer!

Image stacking: head of a mosquito

I took this photo last summer, filed it, and completely forgot about it. It was created from a stack of 42 separate pictures using Zerene Stacking software. See Image stacking revisited: macro photograph a sow bug—take 2 for more information on image stacking.

Like other stacked photos I have uploaded, the picture has a softness about it partially because the lens I have been using (Zuiko 50mm F1.8) just doesn’t provide the resolution I would really like. However, I like this photo partially because of the softness—it kind of feels like a painting. Of course the best thing about this photo is those gorgeous eyes! The softness of the photo has been emphasized by the very tight crop. The original, uncropped picture is below. 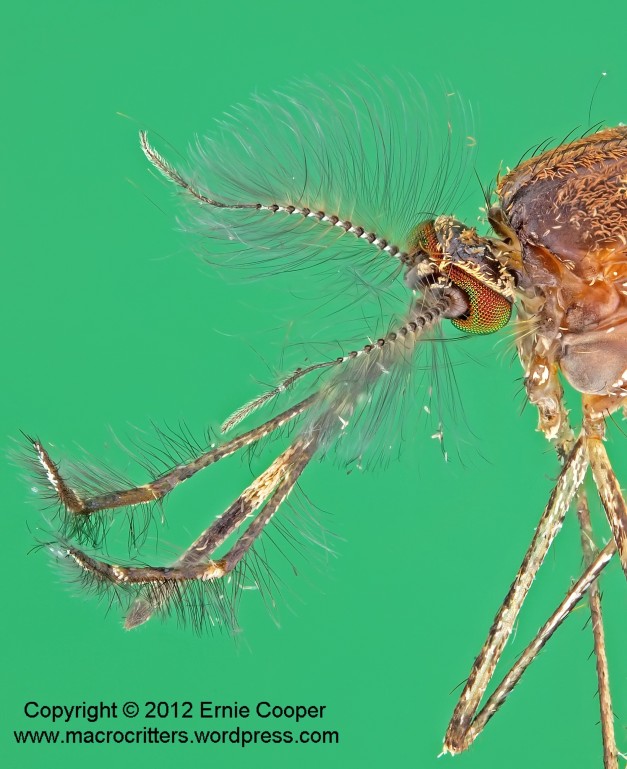 I mentioned in a previous post (Image stacking revisited: macro photograph a sow bug—take 3) that I had purchased a used Zeiss Microscope Focus Arm that I was hoping to turn into a macro stand that will allow me more control when photo stacking. I’m working on it now and have ordered a sharper, higher magnification (microscope) lens. Hopefully I’ll be able to produce more (better) stacked images soon.

Every year the Veolia Environment Wildlife Photographer of the Year Competition is held (and every year I intend to submit some images, but of course I never get around to it). The 2012 competition is now over—the 100 winning photos (from the 48,000 entries) have now been chosen and go on exhibit at London’s Museum of Natural History in October. You can read more about the competition and show here: Wildlife Photographer of the Year.

The BBC Nature page has also posted a slideshow of some of the best images. It is well worth checking out as the photos are wonderful. Unfortunately there is only one macro photo in the slideshow and I had to laugh when I saw it because it seems awful familiar! The image (which is a great photo) is below. If you need a hint as to why I laughed, check-out my previous post Not for the squeamish: macro photography of a feeding mosquito.

Of course the photo above is better than mine…so I think I need to go out and get myself bitten agai…I’m sure I can do better!

Not for the squeamish: macro photography of a feeding mosquito

A photo of a feeding mosquito: the last of a series of pictures taken as the mosquito slowly filled its gut with blood—my blood!

I really don’t like mosquitoes. More accurately, I really don’t like being bitten by mosquitoes. But then, who does? Unfortunately, it often seems that places with great diversity of insects and other tiny creatures to photograph are also areas that are teeming with mosquitoes. In those situations taking pictures means getting bitten. I can’t begin to count the number of times that I have been out in the bush, on my knees in an awkward position, trying to carefully to compose a photo of some small critter while feeling mosquitoes landing on my arms, or neck, or face and starting to bite. In instances like that you just have to decide which is more important: to get the picture or shoo away the mosquitoes. I always chose the picture and as a result I have been bitten literally thousands of times. I don’t use DEET or other bug repellent because I don’t want to get any nasty chemicals on my camera equipment. Wearing a long sleeved shirt can help, but it doesn’t protect your face and hands. Besides, even a long sleeved shirt won’t do much good if it gets stretched tight over your elbow or some other contact point—the mosquitoes can still bite through the material.  I can remember being in the Amazon basin some 20 years ago with my elbows resembling red lumpy oatmeal from hundreds of bites! I had similar experiences in East Africa…I’m probably lucky that at some point I haven’t contracted malaria or some sort of awful fever!

I didn’t go out the other day intending to get bitten by a mosquito—I was actually trying to photograph ants. But this mosquito landed on the back of my left hand and it was too of an opportunity to pass up. I already had my camera set-up and ready in my right hand with the flash charged and the lens focused to maximum magnification. All I had to do was focus on the mosquito and click the shutter. My only regret (well, other than I had to let the little bugger bite me) was that I had the lens aperture stopped down to F22. That gave me maximum depth of field to work with, but I would rather have opened the lens to F11 or maybe F8 to improve the resolution of the image. Unfortunately that would have required me to use both hands to hold the camera and adjust the flash (which was on manual); and I didn’t want to scare the mosquito away before it started to bite me. Boy, I never thought I would ever say that! Sadly, I guess I will have to go out again someday soon and try and re-shoot this series…talk about suffering for your art!

The other photos in this series are shown in order below. 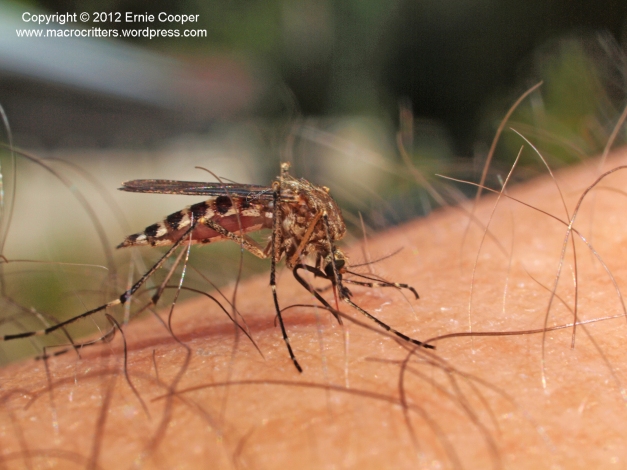 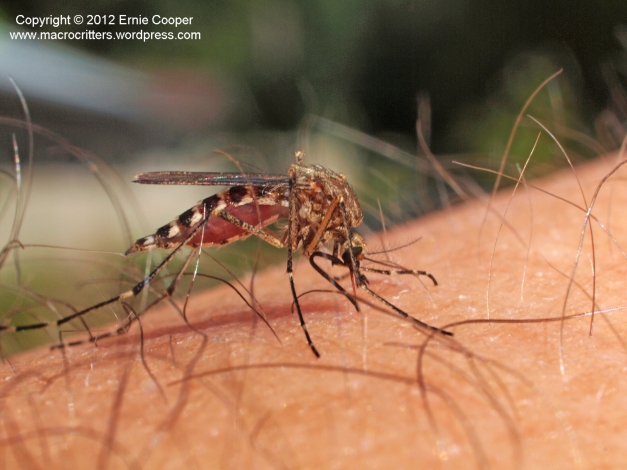 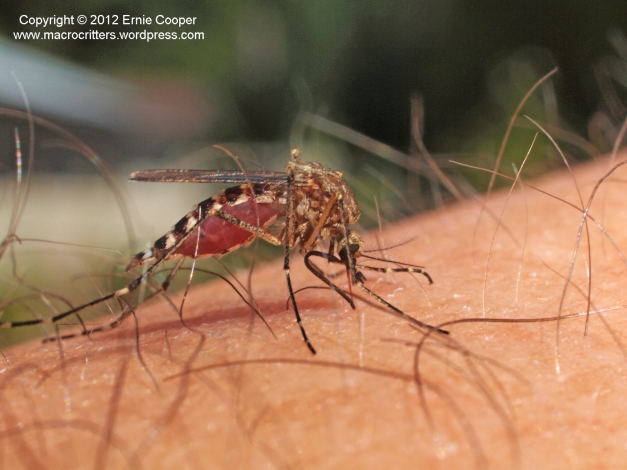 I have to admit that mosquitoes are pretty interesting from a biological standpoint. For example, if you look closely at the last three pictures in the series you will see that the mosquito has excreted a very tiny drop of fluid. This process (called prediuresis: your word for today) apparently helps to concentrate the nutritious red blood cells and remove excess fluid. This fluid is primary urine, so yes, that drop is mosquito “pee”.

OK, that was probably too much information for some of you—but I find it pretty interesting. I still don’t like mosquitoes though.