Pitcher plant vs. wasp: survival of the slipperiest 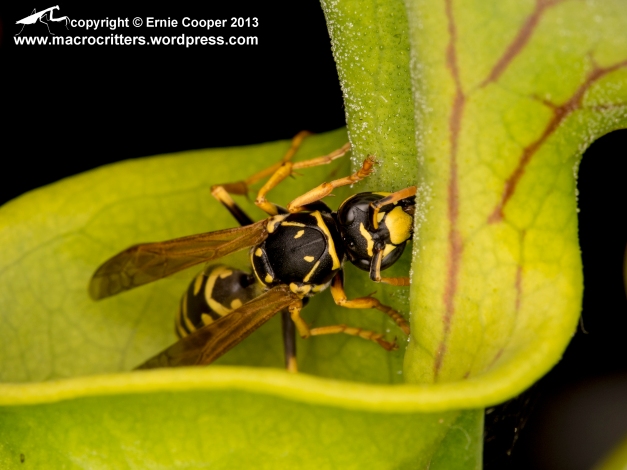 A European paper wasp (Polistes dominula) trying to feed on tiny droplets of nectar secreted on the underside of the operculum of a yellow pitcher plant (Sarracenia flava). The wasp has a very precarious hold on the slippery lip of the plant’s funnel shaped leaf, which forms an escape-proof trap containing digestive enzymes. You can tell that this isn’t going to end well…at least not for the wasp. The wasp was approximately 15 mm (0.6 in) long.

For several years I have been growing Sarracenia pitcher plants in a large pot in my back yard (my miniature bog garden). Sarracenia is a genus of carnivorous (insectivorous) plants that are native only to North America. The plant’s leaves grow the shape of a vertical or horizontal funnel with a flap-like cover over the opening (the operculum). The plants secrete nectar on the lip (the peristome) and underneath the operculum; and the lip and inner surface of the leaf are also slippery with a coating of wax.  Insects are attracted to the nectar, can’t find secure footing, and slip into the tube. The tubular leaf narrows significantly making it impossible for the insect to spread its wings (if it has them); and the inner lower surface of the leaf is covered with downward pointing hairs. The insect can’t fly or climb back out. The plant secretes enzymes to digest the hapless insect, and then absorbs the nutrients. Not a pleasant sounding death I must admit. 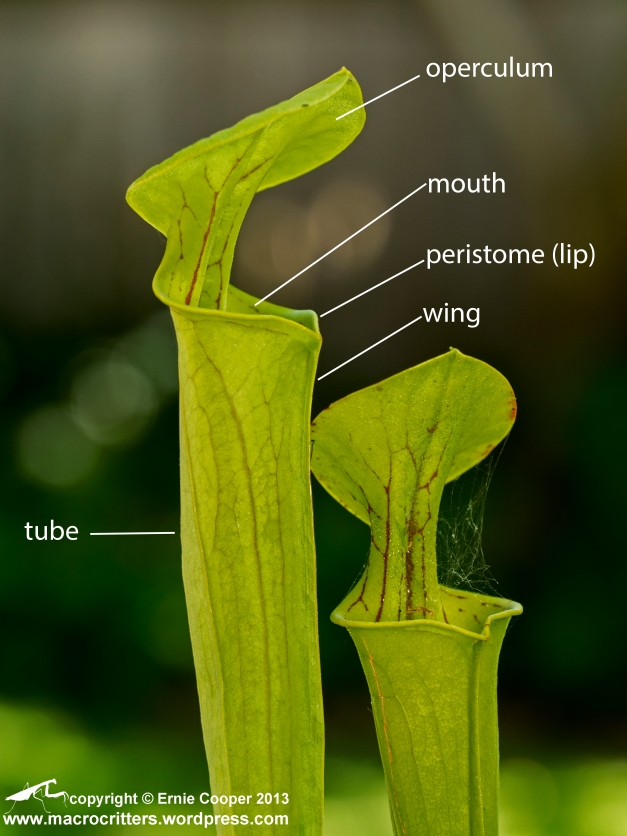 Yellow pitcher plant (Sarracenia flava). Note that an enterprising spider has built a web on the pitcher on the right.

These plants are quite effective at trapping insects. Occasionally I’ll cut open an old pitcher to take a look, and they will always be absolutely stuffed with bits of insect exoskeletons. However, despite growing these plants for years, I had never actually seen one trap an insect until last week. I just happened to be out in the garden with my camera and as I walked past the pot of Sarracenia a European paper wasp (Polistes dominula) landed on a specimen of S. flava (yellow pitcher plant). It promptly crawled under the operculum, clearly trying to feed on the nectar secreted there. I managed to quickly snap a couple of photos before the inevitable happened, and the wasp lost its footing and disappeared into the trap. It all happened very quickly—it’s no wonder I hadn’t witness it before. 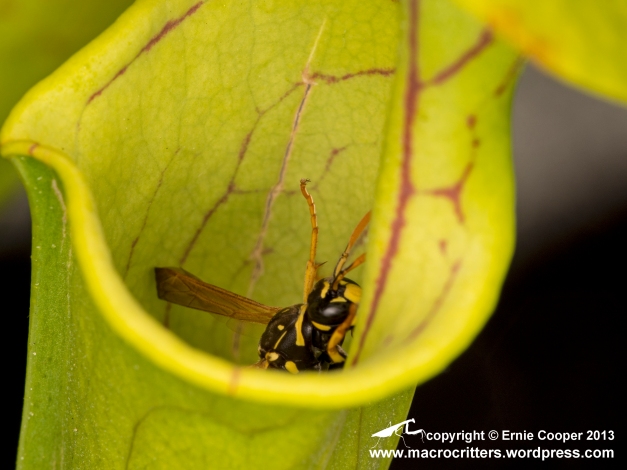 And there it goes…a Europeanpape wasp (Polistes dominula) has lost its footing and is sliding down into the trap of a yellow pitcher plant (Sarracenia flava). The wasp will be digested to provide nutrients for the plant. Unfortunately I missed the focus on the wasp as it slipped to its doom…but the picture still tells the story.

To be honest it was a bit grim walking away from the plant, knowing what was about to happen to the wasp. But now whenever I’m trying to have dinner while being harassed by a bothersome wasp, I can’t help think that I wish it would go visit my pitcher plants…

One comment on “Pitcher plant vs. wasp: survival of the slipperiest”