Portrait of a Thai micro crab

Portrait of a Thai micro crab (Limnopilos naiyanetri) viewed slightly from above. This was a tiny animal, only 2 or 3 mm across the carapace. When full grown the carapace will only be 6-7 mm across.

The pictures above and below are of a tiny specimen of a Thai micro crab (Limnopilos naiyanetri). This is a totally freshwater species of crab that have been found only in Thailand (so far). I discovered these little critters when I dropped by a local pet shop to buy crickets (to feed to my various mantids, scorpions and spiders). I hadn’t heard about or seen this species before, so I bought a couple to photograph and add to my aquarium. Mind you, even after I bought them I still hadn’t really seen one. Even with my reading glasses I couldn’t see them very well—which probably says as much about my eyes as it does about the crabs! But these things really are tiny: if one was to sit on my little finger nail its legs wouldn’t reach the edge. “Micro” is an appropriate description for these crabs.

My aquarium is full of wood and plants, and I knew that once I added the crabs I would be lucky to ever see them again; so I took the time to take photos first. I used the same little aquarium and basically the same set-up as I described in this post: Photography of a diving beetle part 1. I used a clump of Java fern (Microsorum pteropus) for the photos: this species of plant is native to Southeast Asia, so the pictures are reasonably representative of the species in their native habitat. 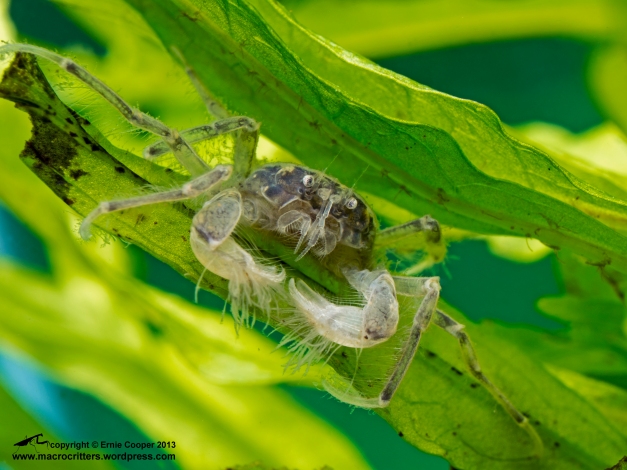 Portrait of a Thai micro crab (Limnopilos naiyanetri). Apparently the thread-like setae on their chelipeds (pinchers) are used to filter food particles from the water.

Once I’d finished photographing the crab I tried taking some video. It turned out pretty well, although if you check it out (below) you will see that the depth of field was very shallow. I didn’t have very much light and had to shoot with the lens wide open. Only later did I realize that I should have increased the ISO so that I could have used a smaller aperture (and gained depth of field) (insert head slapping sound). I am so used to always shooting with the smallest ISO possible that I just didn’t think of it! Oh well, my video technique can only get better. I hope…