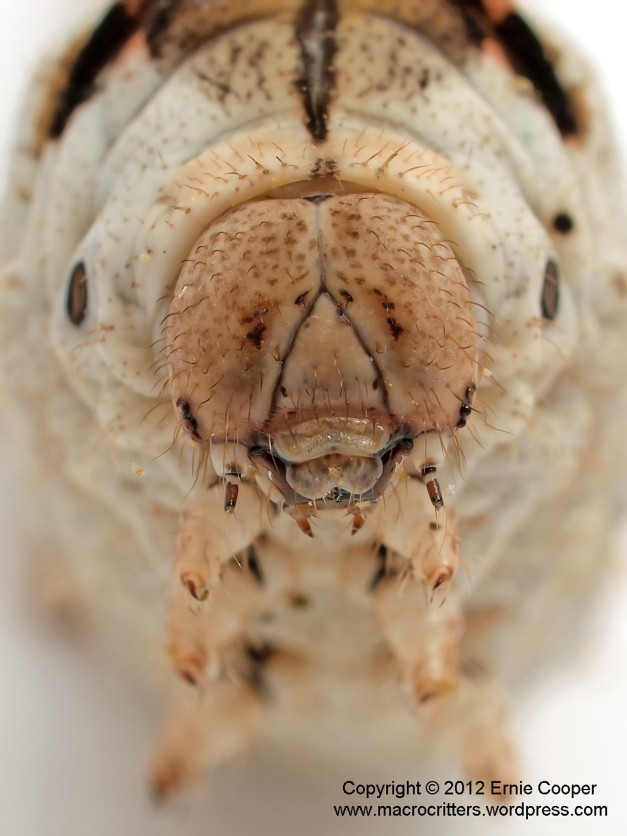 Back in 1998 a group of scientists published a paper in Science that discussed how humans were “fishing down the food web” by first catching all of the big predatory fish on top of the food web, then smaller and smaller species until we end up targeting the small fish and invertebrates that were originally undesired (see Pauly D, Christensen V, Dalsgaard J, Froese R and Torres F (1998) Fishing down marine food webs Science, 279: 860-863).

I kind of feel like I’m in a similar situation—I’m in the process of photographing my way down the pet trade food web. The cold wet weather typical of Vancouver at this time of year has negated any opportunity to go out and take pictures in the field. So I have started to haunt pet shops looking for interesting small critters to photograph. But cool specimens of creepy-crawlies are pretty few and far between. I have had to resort to shooting feeder animals like the tobacco hornworms that were the subject of three separate blogs in recent weeks. Today’s blog is about silkworms—the caterpillars of the domestic silkmoth (Bombyx mori). I found these critters for sale in the same pet shop that I bought the tobacco hornworms in—and yes, they sell them as live pet food. 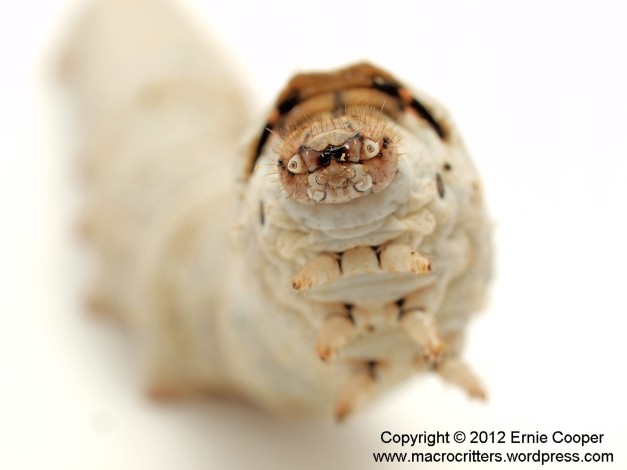 Silkworms are at least exotic (to me at least), and are a pretty interesting species from both cultural and biological points of view. This is a species of insect that is completely dependent on humans for its survival. They do not occur naturally in the wild. The silkworm was domesticated from the wild silkmoth (Bombyx mandarina) which is found in parts of India, China, Korea, Japan and Russia. Silkworm culture for the production of silk has been around for more than 5,000 years. Somewhere along the line, if I understand correctly, captive breeding of the wild silkmoth gave rise to a new species. I find that fascinating.As you can see from the photos above, these are quite attractive critters with pleasant markings and skin that looks like it is about 2 sizes too large for their body. Like most caterpillars, they are just nonstop eating machines—and that is pretty much all they do.

I photographed several specimens using the same white box and technique that I have referred-to in a number of posts (see How to: white box photography of Macleay’s spectre stick insects). Despite their light colour, they show up nicely against the white background. I got a number of nice images of the caterpillars just roaming around the white box floor.

I also took a number of pictures of the silkworms crawling on branches stuck in a jar of sand placed inside the white box. I shot these photos with a grey background, which worked out nicely, as you can see from the photos below. 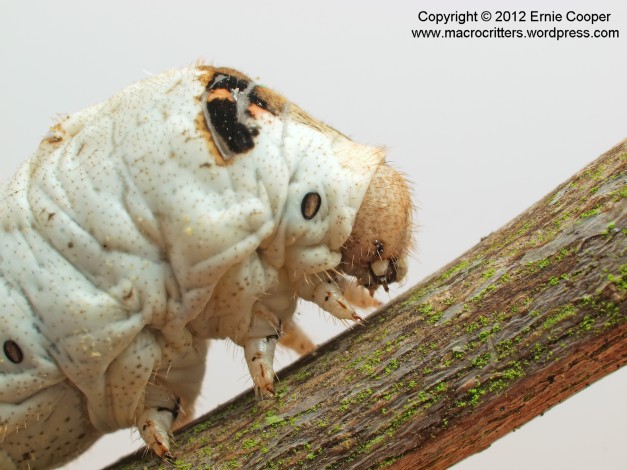 Close-upside view of the head of a silkworm (Bombyx mori)

So what’s my next blog going to be about? I honestly don’t know. In my last blog I joked (sort of) about photographing earthworms. The scary thing is that it is still only November—I still have months of cold weather to kill before I can get back out in the field again. Tobacco hornworms and silkworms are actually really interesting. But pretty soon I’ll be photographing crickets and mealworms. What happens when I run out of feeder critters to photograph?

At this rate by the New Year I’ll be posting pictures of dog kibble and jars of fish food..!

10 comments on “Photographing down the food web: silkworms (Bombyx mori)”