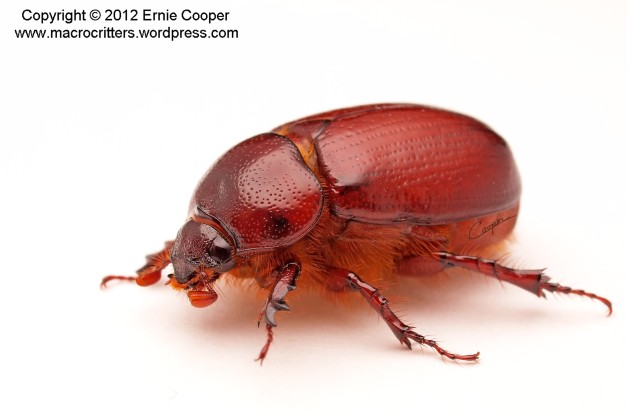 I took the photo above while on vacation in Los Cabos, Mexico. I arrived in Los Cabos after dark, and the first thing I did after I checked-in was to take a walk around the hotel grounds to see what critters I could find. I found two specimens of these beautiful little beetles next to a light set in the ground along the path. I assume the beetles had been attracted by the light. Each beetle was about ½ long (1.25 centimetres) and as you can see, they were a nice mahogany colour. I believe they were some type of scarab beetle, but I have no idea what kind.

They spent the night in a jar in my room so that I could photograph them the next day (before I released them). As soon as I saw these little critters I thought that they would photograph really nicely in a white box. I had meant to bring some foam core with me so that I could construct a proper white box while on my trip, but just didn’t have the space in my luggage and had to leave it behind. So I improvised by using two pieces of paper from the hotel’s photocopier.

One piece of paper formed the floor of the white box. I folded the other piece to form the sides and top of the box as shown in the diagram below. I then photographed the beetle inside the box with my ring flash held above the top (pointed down). 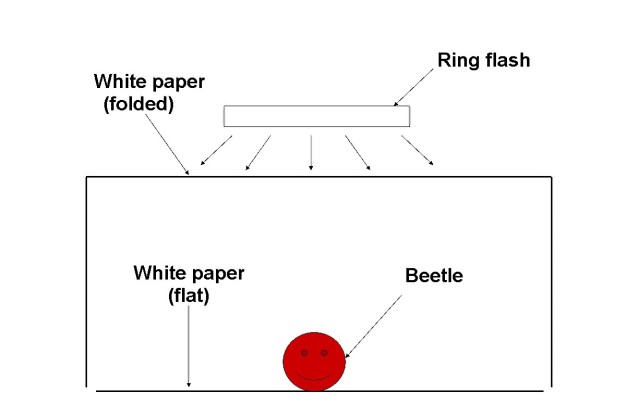 It was a little tricky to hold the camera in one hand and the flash in the other, while simultaneously trying to control a constantly moving insect. But illuminating the beetle through the paper produced a very soft diffuse light that illuminated the shiny beetle in a very pleasing way.