Photography of a water beetle part 2: and now for the good stuff 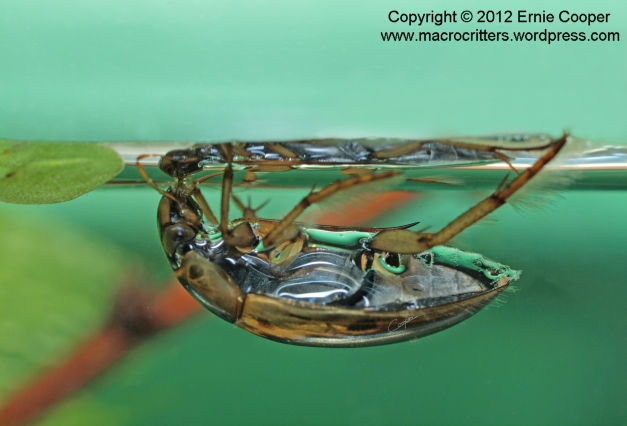 Yesterday I posted photos of a water beetle to illustrate how one could use Photoshop Elements to salvage a poor image. Obviously, however, the goal is not to make this a habit—everyone always wants to produce great photos from the start. The photos I am posting tonight are from my second attempt to photograph this specimen. This time I let the water stand overnight so that there wouldn’t be bubbles forming inside the aquarium, and I cleaned the glass carefully. So armed with clean water, clean glass and a ready camera, I set-out to get some really nice pictures of the beetle. It took me two hours…

[Edit: I originally identified this critter as a predaceous diving beetle (family Dytiscidae). A couple of knowledgeable people eventually contacted me and suggested that it was actually a water scavenger beetle (family Hydrophilidae). However, I have had other people tell me it was definitely a predaceous diving beetle and have even suggested a species name. Unfortunately I released the specimen after photographing it so I can’t confirm either way. So I have decided to just call it a water beetle for the time being, although after looking up the differences and scrutinizing my photos I tend to agree that it is a water scavenger beetle. EC].

As I mentioned in my post yesterday, these insects are almost constantly on the move; and when they do stop, it is usually on or near the water surface. The photo above (which is my favourite) was completely opportunistic as the beetle just happened to stop upside down at the surface to rest and collect fresh air in just the perfect spot for a picture. I managed to take two very nice photos before it took off again. Note the silver bubble on its ventral surface (belly). That is its “aqualung” and provides the beetle with oxygen as it dives and swims.

I really wanted the beetle to stop and rest on a sprig of hornwort plant that I had put into the aquarium. The problem wasn’t getting the beetle to stop on the plant—it would do that periodically on its own if I just left it alone. The problem was that hornwort floats just under the surface of the water. The beetle would always stop on the upper side of the plant, often with its back partially out of the water. In order to get the photo I wanted, I needed the beetle an inch or two below the surface.

I clipped a small paperclip to the basal end of the hornwort to weigh it down such that the plant was positioned vertically instead of horizontally. But of course the beetle would then just stop at the tip of the plant, again at the surface. If I positioned the paperclip such that the tip of the plant was an inch under the surface, the beetle wouldn’t stop on it.

What I finally did was to attach the paperclip to the basal end of the plant and then hang the paperclip just over the lip of the aquarium. The plant would then float at the surface. When the beetle would stop to rest somewhere around the middle of the sprig, I would carefully lower the paper clip back into the water. The plant would then be positioned vertically with the beetle well below the surface—just as I wanted it. Sometimes it would immediately swim away. But other times it would hang on to the plant for a minute before moving towards the surface. That gave me a short window of time to turn the plant and try to position the beetle for a good picture before it took off. 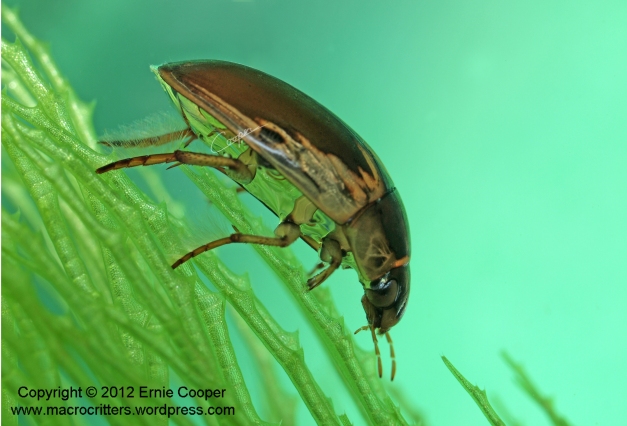 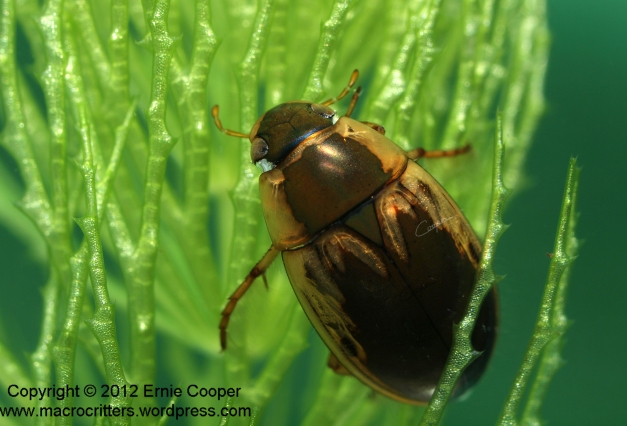 It was a tedious process, but my patience was worth it. I am very satisfied with the final images. What do you think?

3 comments on “Photography of a water beetle part 2: and now for the good stuff”